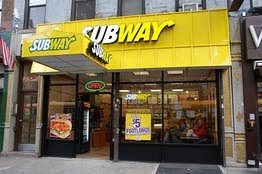 It's official: the Subway sandwich chain has surpassed McDonald's Corp. as the world's largest restaurant chain, in terms of units.
At the end of last year, Subway had 33,749 restaurants worldwide, compared to McDonald's 32,737...
Subway, which surpassed the number of McDonald's in the U.S. about nine years ago, expects China to eventually become one of its largest markets. The sandwich shop only has 199 restaurants in China now, but expects to have more than 500 by 2015.
source