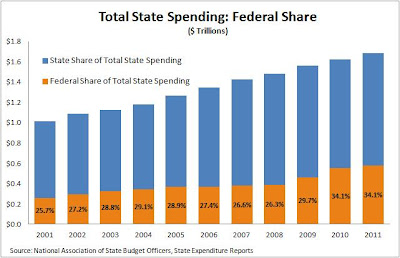 State officials have become addicted to federal subsidies because they allow them to spend money taken from taxpayers across the country instead of having to ask their voters to pony up the funds. As the following charts shows, total state spending continued to increase during the economic downturn because the federal government picked up the slack. Note that the federal share of total state spending went from 25.7 percent in 2001 to 34.1 percent in 2011.

source
Posted by Mayfield at 10:08 AM